As far as I know Christian Louboutin--maker of the sexiest heels--has never done a reverse heel. I came up with reverse heels totally independently a couple of weeks ago while contemplating crazy things to do to women's shoes. Alas, I found out I was soundly beaten to this concept by others and several versions of it have already been made. Basically, a reverse heel is a heel that juts horizontally towards the back from the front part of the shoe rather than straight down from the heel.

So, I decided to mock up what a Louboutin might look like with a reverse heel, whilst maintaining its original lines, curves, and sexy look. It turned out... ok. I think with some tweaking it could turn out to look quite nicely! In particular I would elongate the support past the heel, while making it thinner and more deadly--Louboutin shoes are famous for looking like dangerous weapons. Just a random exploration, we'll see what Christian does :> 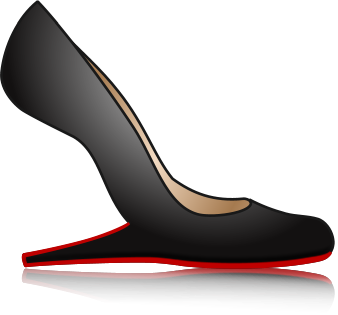