In the 1990’s, my dad worked for a vector graphics startup. Sometimes he’d bring home these thick softcover books filled I’m still working on this piece, but I think it’s ready to be shared even in this draft state. Feedback is very welcome.
—The author. with glossy pages covered with nothing but pictures.

I loved to get lost in page after page of idyllic azure beaches, 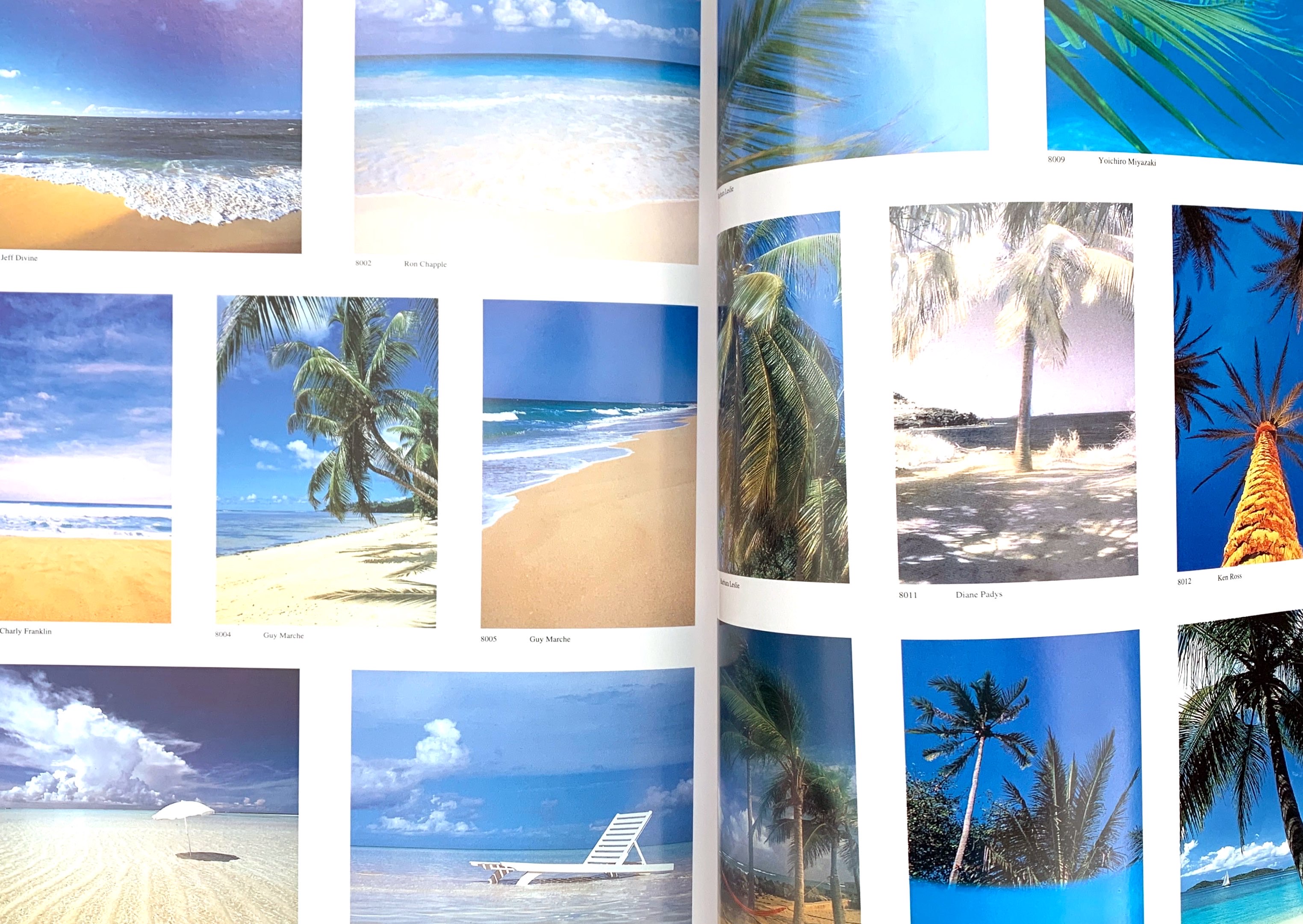 , hands being shaken, piles of currency, majestic vistas, or laughing multi-ethnic faces. Some of them were nothing but rows of tiny boxes barely big enough to make out. Others had bigger prints and included illustrations, or abstract patterns, or closeups of a leaf’s surface.

Being already used to reading encyclopedias cover to cover this was just the sort of concentrated barrage of information I craved, this time in visual form. My dad eventually left that job, and I forgot all about those books.

Stock photography grew in prominence throughout the 20th century. What started as a byproduct of assignment photographySuch as Life Magazine sending a photographer to take photos of something specific. became a major business in its own right. Stock photography served advertisers as well as both corporate and journalistic copywriters.

Over time, as the number of in-house photographers decreased, selling to stock photography companies became a viable endeavor on its own. By the late 80’s there was plenty of both supply and demand.

The 90’s were an inflection point between analog and digital and between traditional stock and microstockThe sort of let’s-crank-out-dozens-of-these-in-this-anonymous-studio-with-this-box-of-props stock photography you often find online these days. . Towards the end of the 80’s, stock photos consisted majorly of naturalistic subjects or broad conceptual ones. As more niche subjects became more common, so did more specialized—and more artistically elaborate—presentation. With desktop publishingDesktop Publishing software such as Aldus PageMaker and QuarkXPress allowed for faster and easier layouts and typesetting. Supplanting phototypesetting and paste up as the primary method of laying out graphic designed printed materials. becoming more common it became increasingly more affordable to produce catalogs that were coherent pieces of graphic design rather than mere indexes.

This is typified by Photonica—a Japanese stock agency founded in Tokyo in 1987 and in New York in 1990Photonica’s non-Japanese business was eventually bought by Getty in 2005. :

The sophisticated colour and abstracted forms of Photonica represent a reaction against the ‘stock photo’ look; the imagery is highly specific rather than generic, and the style foregrounds the vision of individual photographers.Abbot 1994.

The success of this approach led to rapid imitation such as the somewhat brazenly titled Photo Haiku catalog from FPG InternationalFPG International was bought by Visual Communications Group (VCG) in 1997. . Stock photo companies themselves exemplify the common marketing paradox where they must be simultaneously both leaders and followers and so they are never shy about jumping on a trend even as they try to shape it.

A couple of months after my son was born, I was idly thinking of things I’d like to show him some day when I remembered the stock photo catalogs of my childhood for the first time in decades. With that memory came their scent. They smelled a bit like a cross between a bookstore full of new books and a photograph freshly pulled from the photo lab’s paper envelopeAn olfactory simile with a dwindling audience. . Though I realized that recovering that scent may be impossible after all these years, the multi-sensory aspect only bolstered my eagerness to get my hands on them again. 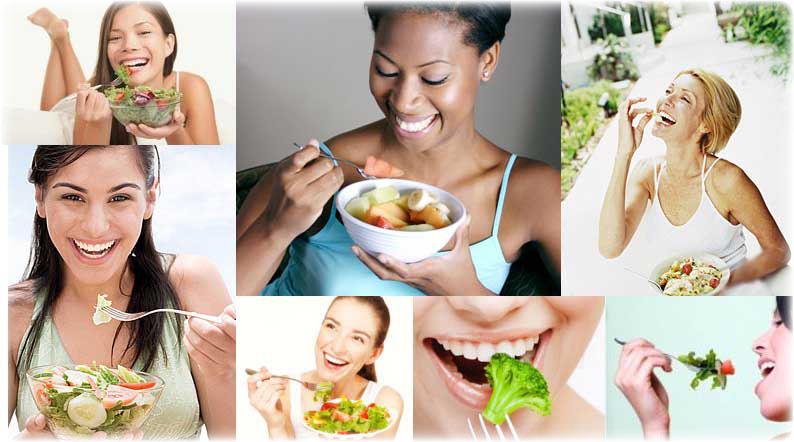 As one might imagine, searching for “stock photo catalog” isn’t very fruitful. The results are overwhelmed by the online collections offering the usual women-laughing-at-salads. Eventually, I managed to dig up some specimens on eBay and was pleasantly surprised at how cheap many were. It did make sense, since these are pretty hefty books that take up a lot of space and have no discernible target market or even ISBNs. What saved them was that while of interest mainly to professionals even when used for commerce, they are clearly not the ephemeral objects that most product catalogs are.

I received my first batch of eBay deliveries soon after. They came to me in San Francisco from right next door in Pacifica, though with a detour through Los Angeles due to the vagaries of intra-Pandemic USPS. The first two I leafed through were lovely and the images were even better than I rememberedA lot of the ones from my childhood consisted primarily of rows of tiny photo boxes, looking a little like film strip. It made for a striking effect but not much detail. . The third one had the smell and I was hooked.

Until I began this search, I hadn’t really pieced together what those books in my childhood memories were, and definitely didn’t know what they were called. Heck, it was before I even learned any English. So to build my collection I had to learn who was involved in the field back then. 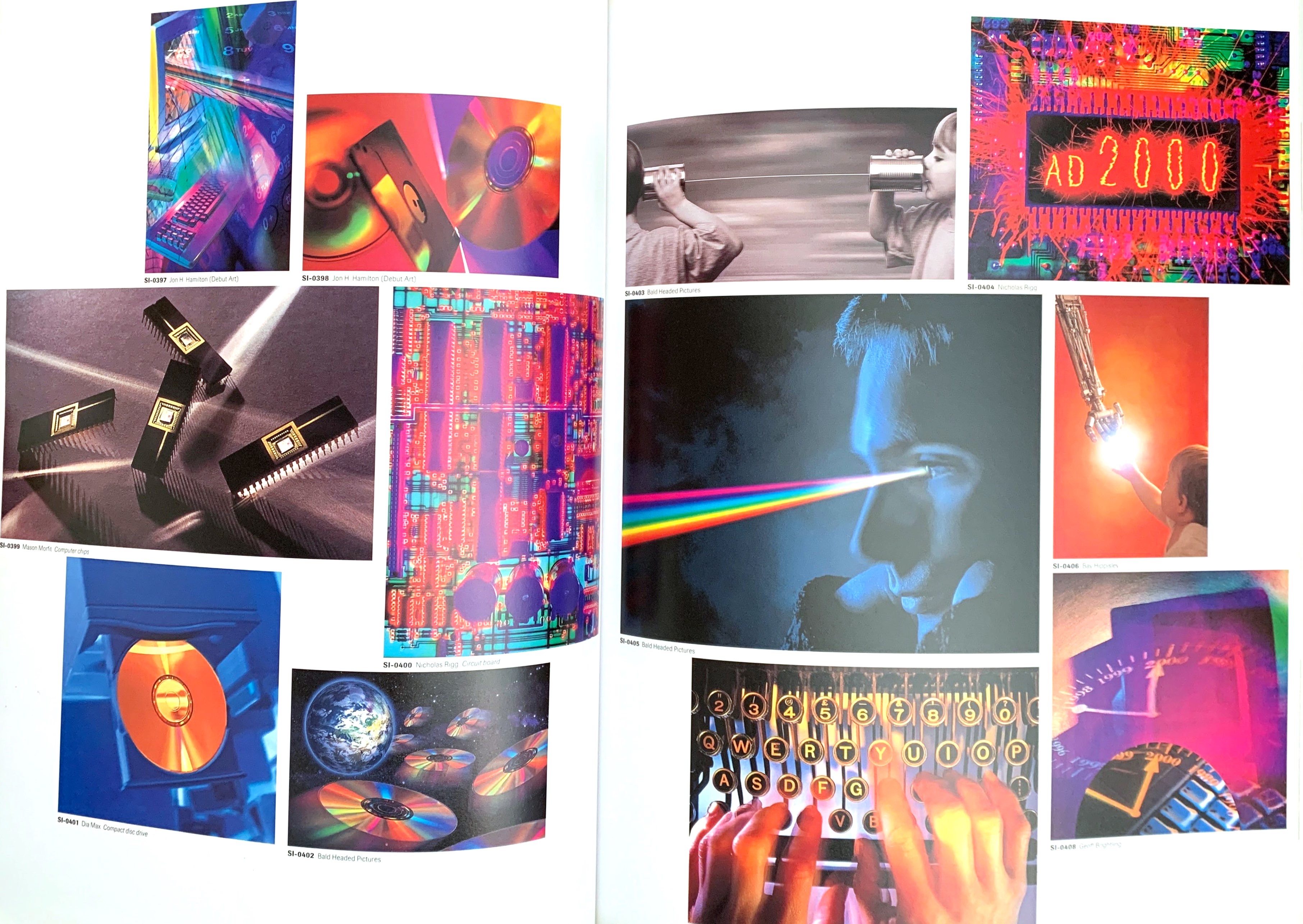 The industry had been undergoing massive consolidation even in the 90’s, which means that many publishers of the catalogs no longer exist or have been absorbed by the majors. The companies that do exist no longer print paper catalogs, everything is digital. Nor do they mention the paper catalogs anywhere. Nevertheless, I was eventually able to build a by-no-means comprehensive but fairly representative collection of stock photo catalogs. I haven’t yet discovered the specific catalogs or even the company (or companies) that printed the ones from my memories, so that quest continues.

I’ve been leafing through them with my sonWho is 9 months old as I write this. , so they’re already accomplishing their intended purpose quite nicely. The amount, quality, and diversity of imagery rivals that of the best coffee table books and comes at a cost saving of as many as two orders of magnitude. But beyond being a cool hack, what makes these such fascinating artifacts?

Before the advent of effortless electronic searches and infinite digital collections, stock agencies had to be able to predict what visuals would be mostly desirable. The transformation of the industry that I touched on above involved taking a more active role in shaping the visual language of the images, not just to respond to trends, but to predict the trends by creating them. Staying on the cusp of cool was the domain of the coolhunterscf. Pattern Recognition by William Gibson. , a pastime both popular and serious in the 90’s. 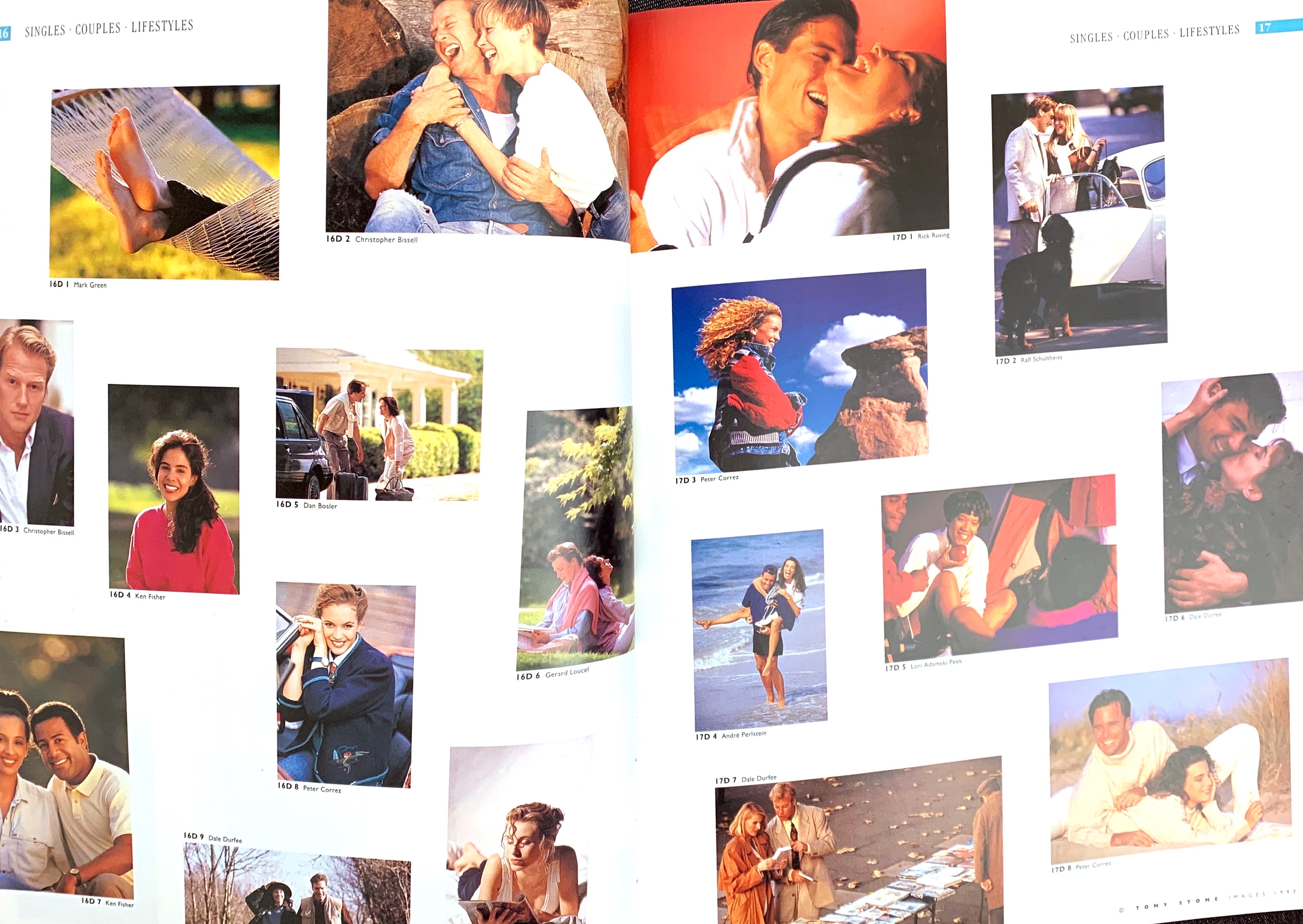 The dissonance of the positivity a user of these images would usually like to convey and the exploitation implied by the attempt makes for fascinating viewing. Many, and perhaps most, of the images are genuine and earnest representations despite this. The question of art within commerce is an old one, and the two have coexisted since the very beginning. The framing isn’t purely mercenary in nature either: a catalog with a nature theme has a chapter with images of humanity’s negative impact on the Earth. While they may also be perfect for the downer portion of your next PowerPoint that section is presented wholly seriously. Beyond the background cynicism of commercial art, the very attempt to dictate the visual culture indicates a sort of optimism from a time when mass-media had a semblance of direction beyond split-second reaction.

A P-trap keeps the sewer smell out.Although few of these catalogs represent the sort of cutting-edge material that coolhunters were tasked with digging up, they are a crystallized form of the machinery of cultural shaping, dating from the awkward teenage years of that pursuit. These days, there barely is any cool to hunt. The grizzled veterans of this field have to contend with increasingly opaque memes, eldritch TikTok trends, and Russian bots. Not an orderly Information Superhighway, but a full-duplex sewage line with no P-trap. So nowadays, stock photo websites are the interfacesto infinite archives, replacing the monkeys’ typewriters with DSLRsMore and more are switching to mirrorless cameras. .

The printed catalogs I’ve been collecting are a snapshot from a time when people still tried to construct a visual culture perpetual motion machine, attempting to drive the trends while being driven by them. Join me in leafing through this preserved Ouroboros of Cool.

Go ahead, look at the man behind the curtain!

So what are these catalogs like? They are all softcover, with a majority roughly octavo-sized: 9”x12” seems most common, with a few slightly shorter or narrower. Several of the Photonica catalogs are octavo-sized, measuring 6”x9”. The thinnest number around 150 pages, with most being somewhere between 200 and 300 pp. They are printed similarly to a very high-end magazine: fairly glossy paper and the printing quality is uniformly high quality. This makes each a pretty hefty specimen.

Each catalog is divided into thematic chapters. A few try to be fairly comprehensive, covering a wide array of categories with some subset of the following seeming most common: I’m still in the process of fully accessioning my collection, and will be cataloging the specific categories each book covers. That’s going to take a little bit of time, so if you’re curious, check back periodically for updates.

Others are organized around a particular theme—e.g. The Green Directory is all nature photography—but then sub-categorize it further. Some do take on more abstract concepts as themes, such as The Positive Image and most of Photonica’s catalogs.

This is another area that I’m still analyzing. There’s a lot of interesting patterns to dig up. As noted above, Photonica tends to have a style that strongly hews to “artistic” photography. The rest will veer in that direction at times, but tend to utilize artistic approaches and techniques in a more systematic manner that relates to the subject matter plainly. For example, using blurring techniques for motion, different filters and color processes to convey emotional valence, etc.

Particularly amusing to me were some of these 90s tropes:

The title certainly hinted there may be a kaleidoscope. Picked some somewhat representative selections from my collection for this one. Please enjoy this trippy (and clearly transformative) work.

Non-mobile Chrome browser (or something Chromium-based) strongly recommended. Animation is pretty jerky on other browsers and devices that I’ve tested. Will try to optimize it soon. 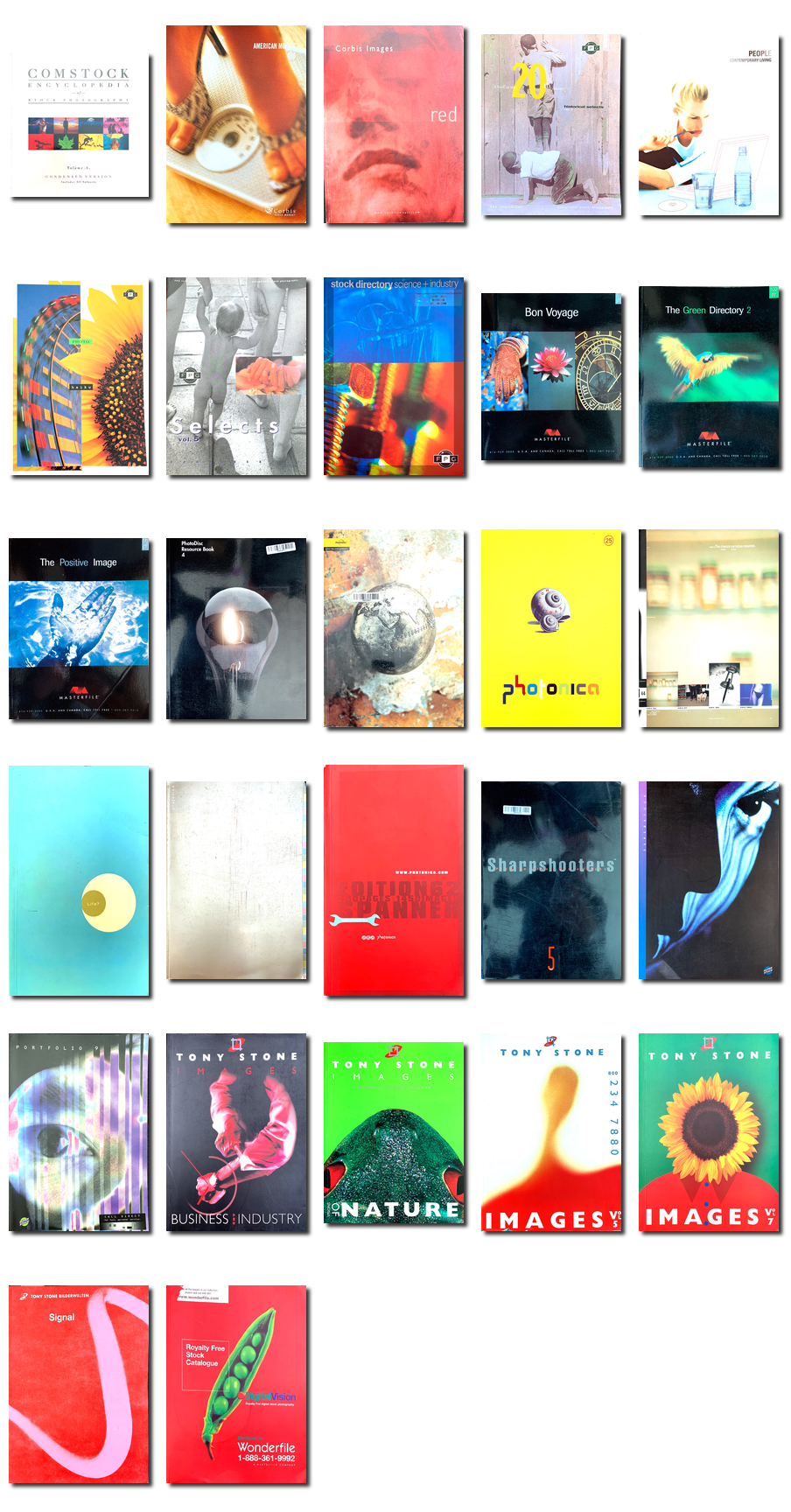