A Classic of Soviet Engineering 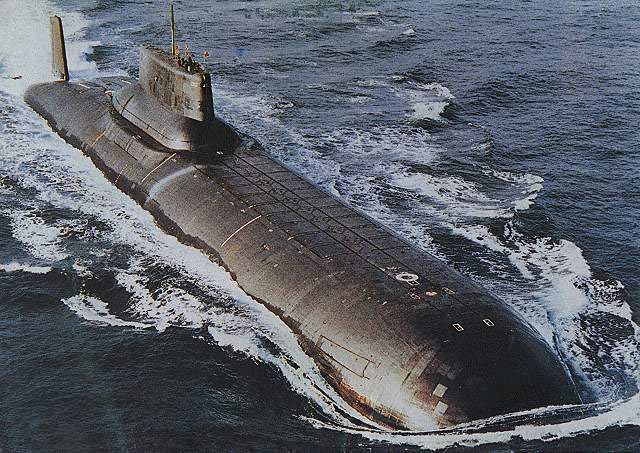 In one of my sailing classes, one of my shipmates was a Russian ex-navyman who served on a Delta IV class (designated "Delfin" or Dolphin in Russian) nuclear submarine. Once he realized I spoke Russian we got to chatting more about his experiences on the submarines and he told me the amusing story of the genesis of the Typhoon-class submarine (that's the NATO designation, the Russians call it "Akula"--Shark).

Those of you have watched or read The Hunt for Red October would be familiar with the Soviet-built Typhoon, it was the Red October itself. It also has a rather distinctive wide and flat appearance.In the late 70s and early 80s, the workhorses of the Soviet nuclear sub fleet were earlier iterations of the Delta class (Delta I through III). The world was moving from liquid-fueled to solid-fueled rockets but apparently the latter take up more space that was available on the Deltas. The Americans were designing and putting out bigger subs.When faced with this dilemma the Soviets thought about it for a while, then put two Delta class hulls next to each other, wrapped them with a shared skin, and called it a day!
P.S. This reminds me of a Soviet joke my Dad used to tell, that I'll translate here into English. It doesn't carry over all too well, but some of you may be amused at the self-deprecation:

The Americans are trying to steal the Russian MiG-29 plans.
The CIA sends a spy who manages to come back with the blueprints.
They build them only to discover they've just built a steam locomotive.
So they send a better spy who comes back with plans that he's sure are the right ones.
They build them, and find they've got another locomotive.
This time they send their best spy, and his orders are to bring back the head engineer.
Back in the US with the engineer they ask him what they were doing wrong. The engineer looks at the plans they've stolen and at the locomotive, and points at some fine print on the plans, "See? you've just forgotten to file it down!"